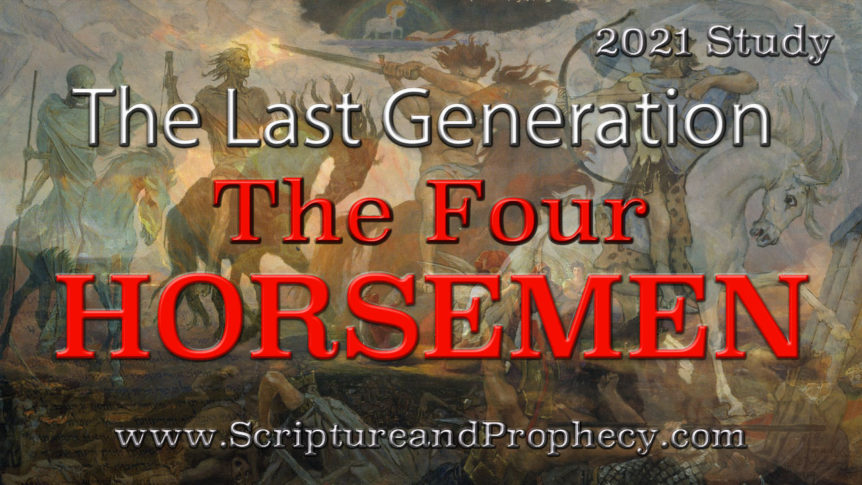 The Four Horsemen of the Apocalypse

When we examine the world, we now find ourselves living in, one can’t help but wonder if the seals of judgment are being opened and if the four horsemen of the apocalypse are now riding upon the earth. In short, the answer is no. The four horsemen of the apocalypse are not yet riding, however, we are most defiantly witnessing a foreshadow of that event and the stage is being set for the rise of the Beast and the end of days.

The book of Revelation explains the Wrath of God and the Great Tribulation will start with what is commonly referred to as the four horsemen of the apocalypse. In this article, I am going to attempt to explain what these horsemen are and what we can expect to see in the very near future.

“And I saw when the Lamb opened one of the seals, and I heard, as it were the noise of thunder, one of the four beasts saying, Come and see. 2 And I saw, and behold a white horse: and he that sat on him had a bow, and a crown was given unto him: and he went forth conquering, and to conquer.” Revelation 6:1-2 KJV

I believe the rider of the white horse is a picture of the rise of the Anti-Christ, a counterfeit Messiah who will come on the scene and look to conquer and subject the entire world. Many will probably see him as a bringer of peace, but what will follow him is war and death.

“And when he had opened the second seal, I heard the second beast say, Come and see.4 And there went out another horse that was red: and power was given to him that sat thereon to take peace from the earth, and that they should kill one another: and there was given unto him a great sword.” Revelation 6:3-4 KJV

An explanation of the Red Horse is simple, he brings a great sword which symbolizes war and peace being taken from the earth.

“5 And when he had opened the third seal, I heard the third beast say, Come and see. And I beheld, and lo a black horse; and he that sat on him had a pair of balances in his hand. 6 And I heard a voice in the midst of the four beasts say, A measure of wheat for a penny, and three measures of barley for a penny; and see thou hurt not the oil and the wine.” Revelation 6:5-6 KJV

The black horse brings scarcity and famine. There will be mass shortages of the most basic of necessities. Even food, such as bread and wheat, will require a day’s wage to purchase. Luxury items, such as oil and wine, will be plentiful. We have witnessed a foreshadow of this very idea over the last couple of years. Food shelves are becoming more sparse, items such as toilet paper are nearly impossible to find at times. Meanwhile, items like wine and liquor are available in great abundance.

“7 And when he had opened the fourth seal, I heard the voice of the fourth beast say, Come and see. 8 And I looked, and behold a pale horse: and his name that sat on him was Death, and Hell followed with him. And power was given unto them over the fourth part of the earth, to kill with sword, and with hunger, and with death, and with the beasts of the earth.” Revelation 6:7-8 KJV

The pale horse is a picture of the horribleness of these judgments. Death and Hell followed him, meaning illness, pestilence, and horror.

The verse describes how a fourth of the earth will die by the means of war, hunger, disease, and the beast of the field. In Genesis chapter 9, the animal kingdom was given a great dread and fear of mankind. This fear will be removed with the opening of these seals and potentially millions of people will die at the hands of wild animals.

In closing, I don’t think there is any doubt that we are entering the season of the end of days. The seals will soon be opened, the four horsemen of the apocalypse will ride forth and the wrath of God will descend upon this wicked and perverse generation. Our only hope is to trust in the Lord Jesus Christ. May we long for His coming rescue and may God have mercy on the inhabitants of this world, which is so quickly passing away. Trust in Jesus now or be forever lost. The time is now. Are you ready?

“Watch ye therefore, and pray always, that ye may be accounted worthy to escape all these things that shall come to pass, and to stand before the Son of man.” Luke 21:36 KJV