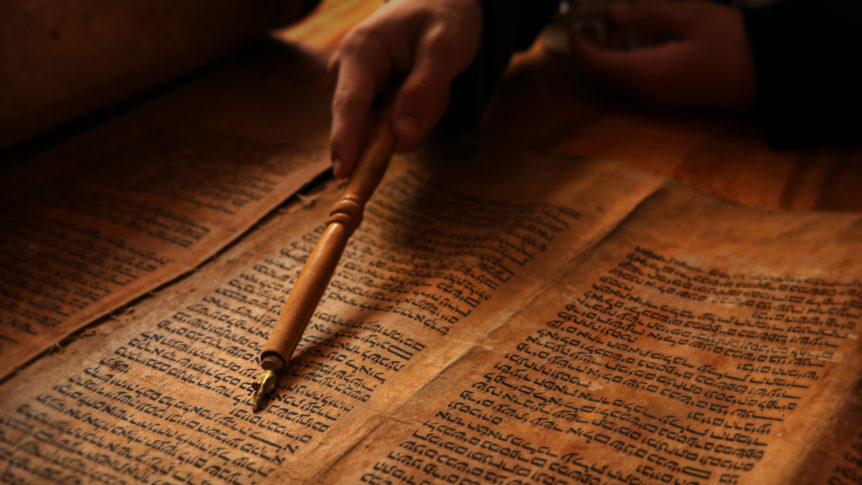 What is the weekly Torah portion?

There seems to be a growing hunger by Christians around the world to seek a deeper understanding of the word of God through learning more about the Biblical Hebrew language and the Torah. You have probably come across YouTube channels, like ours, reading from and talking about the weekly Torah portion or, in Hebrew, Parashat HaShavua. So what is the weekly Torah portion exactly?

Every Sabbath, it is the Jewish custom to read aloud from the Torah. These readings are broken up into fifty-four weekly portions, usually comprising two to six chapters. These fifty-four readings follow a schedule that will allow for the entire Torah (the five books of Moses) to be read over the Hebrew calendar year. Each weekly Torah portion has a name that is derived from the very first verse of that week’s reading. For example, the first portion is Genesis 1-6:8 and is titled, B’reisheet, which means “In The Beginning.” Often these readings are also accompanied by the weekly Prophets Portions, or in Hebrew, Haftarah.

It is believed the weekly Torah portion was instituted after the Babylonian captivity by the scribe Ezra. We can see an example of this found in the Book of Nehemiah.

“And all the people gathered themselves together as one man into the street that was before the water gate; and they spake unto Ezra the scribe to bring the book of the law of Moses, which the Lord had commanded to Israel. 2 And Ezra the priest brought the law before the congregation both of men and women, and all that could hear with understanding, upon the first day of the seventh month. 3 And he read therein before the street that was before the water gate from the morning until midday, before the men and the women, and those that could understand; and the ears of all the people were attentive unto the book of the law. 4 And Ezra the scribe stood upon a pulpit of wood, which they had made for the purpose; and beside him stood Mattithiah, and Shema, and Anaiah, and Urijah, and Hilkiah, and Maaseiah, on his right hand; and on his left hand, Pedaiah, and Mishael, and Malchiah, and Hashum, and Hashbadana, Zechariah, and Meshullam. 5 And Ezra opened the book in the sight of all the people; (for he was above all the people;) and when he opened it, all the people stood up: 6 And Ezra blessed the Lord, the great God. And all the people answered, Amen, Amen, with lifting up their hands: and they bowed their heads, and worshipped the Lord with their faces to the ground. 7 Also Jeshua, and Bani, and Sherebiah, Jamin, Akkub, Shabbethai, Hodijah, Maaseiah, Kelita, Azariah, Jozabad, Hanan, Pelaiah, and the Levites, caused the people to understand the law: and the people stood in their place. 8 So they read in the book in the law of God distinctly, and gave the sense, and caused them to understand the reading.” Nehemiah 8:1-8 KJV

Why should Christians care about the weekly Torah portion?

Do yourself and your walk favor and take the time this year to work through the weekly Torah portion schedule. I promise, your relationship with God, His word and His son Jesus will vastly change as a result.